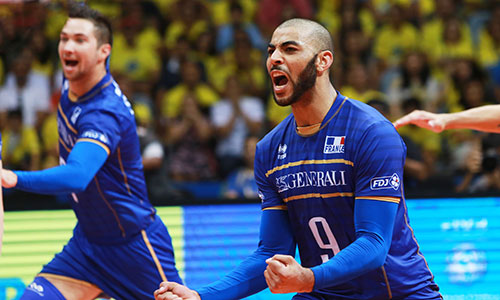 Earvin Ngapeth is famous as a brilliant volleyball player, as hip-hop artist, but also with his numerous scandals. It’s a long list, but I’ll try to brief but comprehensive.

In 2010 – a 19-year old Earvin Ngapeth was involved in an argument in the locker room, with rumors that it was because he was benched during the 2010 World Championship. He was expelled from the National Team by the coach Philippe Blain.

In August 2012 he got into a fight at a nightclub in France. A suspended deprivation of liberty for 3 months has been imposed by the Criminal Court of Montpellier.

In 2014 Ngapeth left his club team Kuzbass Kemerovo in Russia, where his father was the coach, without explanation before eventually joining Modena.

In July 2015, he was arrested by the police and went to court after assaulting a TGV train conductor at the Paris-Montparnasse train station. Ngapeth, who was accompanied by a relative, asked the conductor if it was possible to delay the start of the train because he was waiting for a third person. The things went bad when the conductor replied that it wasn’t. Ngapeth allegedly slammed the railway employee, causing an injury on his eyebrow. Still, three years later he was cleared of all charges.

In November 2015 in Reggio Emilia, Italy, he run over 3 pedestrians and ran away without assistance and only reported to police days later. Two people suffered minor injuries while another person had been seriously injured. He eventually apologized after running away from the scene. He was sentenced to one year of probation after pleading guilty in court and had his driver’s license suspended for one year. He financially compensated 2 of the 3 victims while the third has not requested any money.

In December 2017 Earvin Ngapeth was caught driving under alcohol influence after a night out with some volleyball friends in Modena, including Bruno Rezende, his teammate. His alcohol level was 1.98 which is almost four times the legal limit. Police confiscated his driver’s license and towed his car which was provided to him by his team. Modena has declined to comment about Earvin’s latest trouble but they fine him together with the other 5 teammates he was with that night.

Just days ago after the matches in the Club World Championship in Brazil he has been caught committing sexual harassment in a nightclub in Belo Horizonte. On the picture you can see how he is giving a slap to an unknown woman. She notified the police and the volleyball player was arrested. In court he defended himself that he mistook her for a friend and did not intend to offend anyone. In any case, the woman did not accept the apology. Ngapeth was briefly arrested and released on a bail. Now he is facing five years in prison.